It has probably not escaped many of you that Windows’ market share (and that of related editions) is being eroded and is potentially under threat to varying extents in some markets as we role into 2010.

I think however, that Microsoft has the opportunity to really drive adoption of Windows, but not in the way it has before.  The real opportunity for Windows’ continued prosperity lies in the cloud.  Even though this may happen, I do not however think it will be seen as a success – at least not initially (and doomsayers for Windows will jump on this).  The resulting public attitude will probably really grate at Microsoft for some time.

The money may continue to stream in because Microsoft has (or is now planning) a story whereby more people can begin to use, or will continue to use Windows but it would be more so Windows Azure (not the client OS) and they will not be paying for it directly.  The indirect payment may lead to less consumer-based visibility, which may create a negative trend in public opinion (which is what matters in today’s Internet-temperature-measured society).  Few people care how their cool app works.  Azure may be a great back-end for a web-based iPhone app, but it would probably be seen as a point for iPhone/Apple, not Windows/Microsoft.

Microsoft has a ‘Good, Better, Best’ mantra for client richness, but it has previously focused its attention on the ‘Best’, aka Windows ‘proper’.

An application with a Windows 7 client and a Windows Server + Windows SQL Server back (and other servers), and perhaps Office apps as optional clients, is the ideal for Microsoft revenues, but Microsoft is starting to see that serving the ‘Better’ experience is necessary and potentially even more profitable if they can’t get you to effectively subscribe to a ‘Windows’ license by helping to make sure your application/service provider uses Azure.  These providers are paying the real fees to Microsoft while collecting their own revenue stream from users through fees and/or ad-supported revenues.

Silverlight equates to a compact yet rich UI experience that will broaden in future versions and is, or will be, available on many platforms, serving as a great gateway to the Windows Azure Platform.  WPF applications on Windows available via ClickOnce installations (or as XAPs via IE/Firefox) also represent revenue suckers on the tentacles to Azure.    Ray Ozzie flat-out said at PDC09 that Internet Explorer 9 and Silverlight (preferably on Windows 7 of course) are the future for all 3 screens.  That of course leaves IE9 on Windows (or the lesser IE versions on other Windows platforms) or other browsers as the ‘Good’ option which again can also be services on the back-end by Windows Server or Windows Azure.

Microsoft has of course already been collecting service-provider style licensing fees via its SPLA program.  My company has been a licensee for some time in fact.  A cohesive and (almost, but not quite yet) affordable cloud offering for small ISVs opens up the flood gates to licensing Windows (in it’s Azure form, along with SQL Azure) to many more end users who can be consuming ‘Windows’ on any platform, even a Google Chrome browser.

To make this work, Microsoft really needs to up its game for developers in terms of tools and offerings…

It doesn’t help that Silverlight tool support in Visual Studio has been non-existent; forget Expression Blend that developers haven’t had the time or perhaps money to conquer.  WPF applications have also been few and far between; likely for similar tool-support reasons.

Visual Studio 2010 may be just in time, and Microsoft is clearly taking no chances, having recently announced a delay to the RTM in order to improve performance.  This is the first version of the IDE using WPF and Microsoft can’t have poor IDE performance be the reason that developers shun VS2010 en mass.  Adoption of 2010 is crucial because Microsoft has invested energy into integrating tools for their new technologies/platforms and making them easier to target (e.g. SharePoint 2010 and Azure).  The announced delay seems like the smartest move to me.

The included Azure consumption units being added to MSDN Subscription are a tiny and insufficient token.  The initial offering for the highest level subscribers covers one Windows Azure server for 8 months and then goes down.  This simply isn’t high enough to encourage people to get something off the ground.

Microsoft needs to do well with Windows Mobile 7.  This is rumoured to have a Silverlight-based interface which would be more of a plus if the tools had matured already.  If Microsoft could get all the Internet-connected apps for WM7 to be hosted on Azure, maybe they could give away the WM7 license?  You currently need a non-free Visual Studio edition for client-based Windows Mobile development.  Perhaps adding a free Visual Mobile 2010 Express Edition would help push things along?

So the more precise prediction is that Silverlight+Azure = Windows in terms of revenue to many more end-users (who may not be on Windows or have no prior computer), as well as potentially preventing loss of net revenues if people move off the Windows Client.  It may be hard to measure initially like Obama ‘creating or saving’ x million jobs.  It may not happen in 2010, but the seeds must be sewn in 2010.  The real key advocates for this maneuver are the ISVs and service providers and its (and the predictions) success or failure will ride on motivated these parties are to go down this route as well as how easily they can execute it.  Microsoft has to do more to provide solid timely tools, communicate the benefits, educate developers and provide substantial/usable offers for Azure adoption.  Microsoft has not announced a PDC 2010 which means it falls to Mix (not clearly a transition-to-cloud conference) and TechEd conferences (often seen as more IT Pro than developer), regional evangelism, local evangelism and blogs 😉 to help them along…

Here’s the timeline for the ramp-up of Azure Platform Services billing:

Microsoft’s Corporate VP of the Developer Division, Scott Guthrie today announced on his blog that the final release of Visual Studio 2010 and .NET 4.0 will be moved back ‘a few weeks’.

On the other hand, there will now be a public Release Candidate in February with a ‘broad go-live license’.

This previously unintended RC and final release delay are apparently to test out resolutions performance issues encountered by beta users and get final feedback.

The Mix 2010 conference is in the first half of March 2010, so I’d expect final schedule announcements of both at that point.

Head over to the blog of Microsoft’s Corp VP Scott Guthrie for the details on getting the source code for the demos he used in his PDC 2009 Day 2 Keynote.

These demos include local webcam still and recording capture with effects, a barcode reading demo, rich text support and the ever popular jigsaw puzzle brush demo but this time with a live embedded web page that can even contain a live flash movie!

A notable omission is the code for the Facebook integrated app.  That demo showed an application that ‘picked up’ picture files from a memory card storing pictures of the PDC audience just takes with a camera.  I couldn’t find the help resources for this kind of ‘device access’ feature that was announced.  I’m thinking that perhaps this feature was not included in the publically downloadable beta.  Scott did say that the Facebook app sample would ship later, but I guess not just yet.

This post guides you through the process of deploying and configuring the provided Silverlight application on Windows Azure through the Windows Azure Platform web portal using just your compatible web browser.  You do not need any development tools…

The included Guest Wall application is a Silverlight app hosted in a ASP.NET website that runs on Windows Azure Hosted Services and uses the Windows Azure Cloud Storage to store messages that anyone can post.  You can configure it to some extent as explained below. 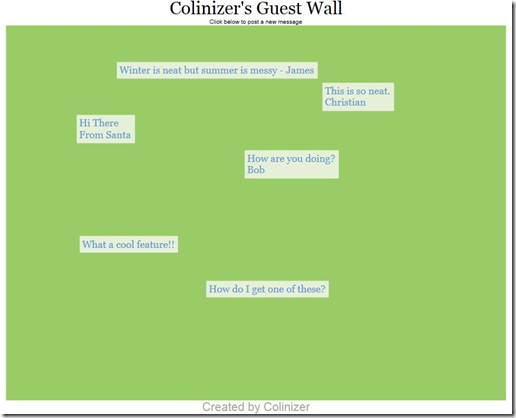 END_OF_DOCUMENT_TOKEN_TO_BE_REPLACED

Today was the 2nd and final day of Microsoft’ Tech Days conference in Ottawa (the 6th city on the 7-city tour).  I had the opportunity to speak about two great topics:

This talk focused on new features in Silverlight 3.  It was clear that many people have yet to take a look at any version of Silverlight.  This made for a fun challenge – trying to explain new features, while also explaining Silverlight basics, and say how it compares to JQuery with HTML 5.  Ottawa’s government-worker-centric population may explain the results of my straw-poll survey with the audience.  The snow-storm in the morning made a little dent in attendance, and given the audience make-up, a general introduction session for Silverlight would likely have received a bigger audience (and would probably still do so a year from now when talking about what’s new in Silverlight 4).

Optimizing your apps for the Windows 7 user experience.

This session seemed to get a very positive response, most likely due to the fact that the Windows API Code Pack is available which provides managed wrappers to the Windows 7 native APIs such that making use of new Windows 7 features (like the Taskbar) is practically trivial.

It was a great experience working with the Microsoft Canada guys and my friends in the community.  I look forward to doing so again next year on topics such as Silverlight 4, Azure, Office 2010, VS2010/.NET 4.0, and hopefully in multiple cities.

I think perhaps March 22nd with VS 2010 fir the RC or final at a squeeze.  According to Scott Guthrie, the RC may have more hardware accelerateion.

Check out the PDC sessions (video showing up in the near future) on Silverlight 4:

Colinizer
Create a free website or blog at WordPress.com.